The Basics of Reactors

In order to understand the basics of reactors, we first need to look at how motor drive systems work. Motors that operate on alternating current need special power supplies that deliver power to start and stop the motor smoothly. If the motor were to transition from full “off” to full “on” in a short period of time, it would put undue stress on the mechanical parts of the equipment. Instead, the power supply needs to start and stop the fan motor gradually. Likewise, once a motor is running, many applications require adjusting its speed and torque to accommodate different mechanical loads. Variable frequency drives (VFDs) provide a power supply that can offer gradual start/stop and variable speed/torque. By adjusting the frequency of current sent to a motor, a VFD controls its speed.

AC motors operate at their peak efficiency when they run on clean sinusoidal power. VFD’s, however, produce modulated square waves. The pulse width of these square waves are variable. This is known as PWM—pulse width modulation. VFDs can also control the amplitude of each square wave. Powering a motor with square waves might, at first, sound like a poor idea. However, VFD’s maintain such fine control over the width and amplitude of the square waves that they take on the appearance (as viewed on an oscilloscope) of fairly good approximations of a sine wave. Yet even the most sophisticated VFD’s fail to match the purity of a true sine wave. These variable frequency drives produce distortion or “noise” on both the input and output of the drive. That’s where reactors come in.

The Benefits of Line Reactors:

The Benefits of Load Reactors:

Installing a reactor between the VFD and the motor protects the motor from drive produced current harmonic distortion. For a more robust solution, CTM Magnetics offers a wide variety of sine wave filters for both line and high frequency applications.

The VFD and reactor combination reduce overall output current harmonic distortion, protecting the motor. Operating a motor drive system without a reactor or sine wave filter can cause several problems: 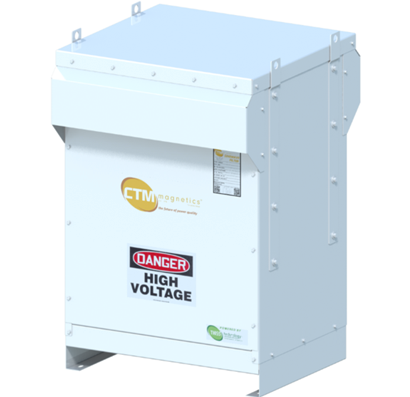